I thought it might be helpful to put all we have discussed so far in a diagram. 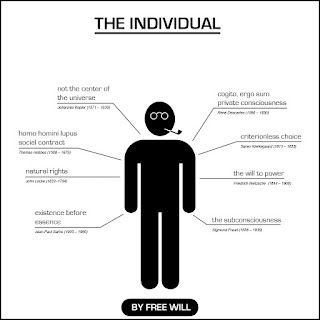 It recapitulates nicely all we have said about the concept of the individual as it developed in Europe.

Just look at it closely….it is quite a picture….

In fact it is a rather unique picture. Nowhere in the world has developed such a view of man except in Europe.

The ultimate conclusion of this individual  could be, that he is all alone in the universe and has to discover why he exists all by himself.

So let’s turn our attention to Jean-Paul Sartre (1905 -1980). He argues that mankind is abandoned in the world.

This is not to say mankind has been abandoned in the sense of 'left behind' or 'neglected' by something or someone.

For Sartre there is nothing "out there" that could have abandoned us in this way. Rather, mankind is abandoned because there is no God to give human life purpose or moral direction.

Sartre's adoption of the notion of abandonment is the clearest possible expression of his profound atheism, his view that mankind is a cosmic accident and not the product of some higher design on the part of God or gods.

This conclusion brings us to the quintessence of Sartre's existentialism. As the human being is uncreated the idea or essence of each person does not precede his existence. Thence existence precedes essence.

With this maxim Sartre wants to say that the human being first exists without goal or definition and finds himself in the world. As a reaction on this awareness he defines the meaning of his existence.

This is the very opposite of philosophical idealism which we already find with Plato and Aristoteles. For Sartre it is not ideas, essences or minds that are primary but pure existence in the form of Being-IN-itself.

Being-IN-itself, like a stone just IS, does not depend on anything else for its being, whereas Being-FOR-itself, the basis of consciousness and ideas, arises through the negation of Being-IN-itself.

Sartre places negation at the centre of his ontological theory of consciousness, his theory of Being-FOR-itself.

In "Being and Nothingness" he argues that the only kind of being that can exist as a relation to reality or the world is a being that is, in itself, nothing, the negation of Being-IN-itself.

This may sound pretty abstract and you may wonder what he means by this. Let me try to explain. We are in the world in two ways.

On the one hand we are a material object, a body and as such we exist in the same way a stone exists.

Consciousness, however, makes us aware of our Being and is as such the negation of our Being-IN-itself. We become without purpose or design a Being-FOR-itself. Impossible to be in the world like a stone is.

The designer of the meaning of our live are we ourselves. We create ourselves by making choices, groundless choices, but we have to choose for even not choosing is a choice.

Sartre's general claim is that ultimately choice is always and unavoidably based upon arbitrary decisions.

His view is that if a choice could be guided and influenced in any way by beliefs, convictions or values, it would be a caused phenomenon rather than a genuinely free choice.

In the novels of Sartre we meet the ultimate individual, an unknown concept to many people on this earth. What to think of this situation ???

Thank you for your  attention…the floor is yours…