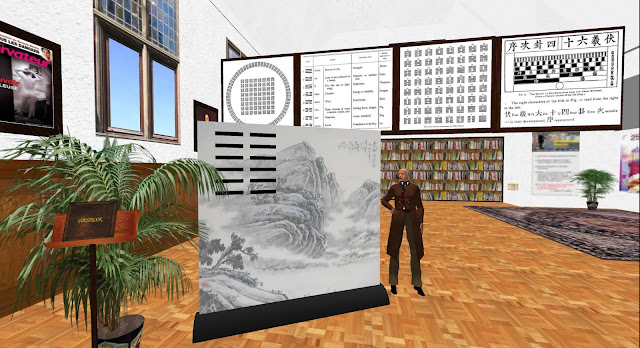 As we all know, religion plays an important role in the development of philosophy and science, in our Western philosophy a well known fact.

The developments were either dominated or obstructed by the Church or science tried to free itself from understanding reality, based on religious ideas.

When we think of China we hardly can associate it with some religion, like India can be associated with Hinduism or Arabic countries with the Islam.

Maybe some of you think of Buddhism in relation to China. One reason why we may have trouble to connect a religion with Chinese culture, may be due to Confucius. His attitude towards religion is a kind of agnostic and you just don't discuss it.

Of course there were religious concepts is Chinese metaphysics too.The insufficiency of the dualism which finds expression in this contrast of the Yang and Yin principles, must have made itself felt very early,

for the Chinese philosophy, as it appears in all the classics, exhibits a decided tendency towards monism. The Yang and Yin are thought to have originated in a process of differentiation from the T'ai Chi, which is "the grand origin," the source of existence . Its symbol is a circle.

The T'ai Chi is not mentioned in the body of the
text of the Yi Ching, but is commonly believed to be implied in its secret teaching. This opinion appears to have been established as early as the time of Confucius.

In modern usage the term Tai Chi is now commonly understood, both in the West and in mainland China, to refer to the martial art and exercise system. What is now known as "T'ai Chi " only appears to have received this appellation from around the mid-1800s.

About 230 CE wrote the Chinese scholar Wang Pi: "Existence must begin in non-existence, and therefore the Grand Origin produced the two elementary forms.

T'ai Chi is the denomination of what has no denomination. As it cannot be named, the text takes the extreme point of anything that exists as an analogous term for the T'ai Chi."

In the diagram to my left behind me the inscriptions in the two large black and white rectangles immediately above the circle read from the right to the left " yin " and "yang,".

If we fold the diagram in the middle we find that the yin and yang differentiations of the great origin cancel one another and the whole world sinks back into nothing, into black.

This symbolizes the omneity of the zero, which will illustrate what Chinese thinkers mean when they speak with reverence of the great nothing, of emptiness, of non-action, of non-existence.  To them it represents the omnipresence of the Deity in the All.

it is found in the male and female principles of nature, in the five elements, and in the myriad of things. . . . Should any one ask, what is the great extreme ?

(…)The great extreme is the immaterial principle of the two powers, the four forms, and the eight changes of nature ; we cannot say that it does not exist, and yet there is no form or corporeity that can be ascribed to it."
This is a reference to the Yi Ching.

Here we say again, that almost every culture in its metaphysics creates a believe in an uncaused cause a T'ai Chi. Next step is to personalize this uncaused cause.

Let's have a closer look at the Yi Ching today. Behind me you see the table of the 8 trigrams or "Kwa". Apart form some legends there is nothing known about their real origin, but they seem to date back to 3322 BCE.

The ancient kwa-philosophy, as we  may call the system of comprehending things as permutations of the two principles Yang and Yin, plays an important role in the thoughts of the Chinese people.

With its help the origin of the world is explained, rules of conduct are laid down and a forecast of the future is made.

As to the original meaning of the kwa-philosophy, we have positive evidence of its mathematical character, not only in various suggestions of Chinese traditions, but also and mainly in the nature of the kwa themselves.

This is a remarkable feature of the Yi Ching, because contrary to, for instance Pythagoras, who associated metaphysical meanings to numbers, the Chinese thinkers didn't do anything with the mathematical depth of the Yi Ching.

The oldest mention of the Book of Permutations is made in the official records of the Chou dynasty, which succeeded the Yin dynasty in 1122 B.C.

In the Yi Ching we find the eight trigrammatic kwa combined into groups of hexagrammatic kwa, resulting in eight times eight or sixty-four permutations, every one of which has its peculiar name and significance.

An explanatory text is added to the sixty-four permutations of the kwa hexagrams, consisting of seven lines.

The first line, written by Wen Wang,  applies to the hexagram as a whole, and the remaining six, written by Cheu Kung, have reference to the six sundry lines of the hexagram, counting the lowest line as the first and the topmost as the sixth.

And here we run into one of the many enigmas of the Yi Ching. There is no explanation for the fact that the Yi Ching only uses 64 hexagrams.

One of the arrangements of the hexagrams that are met within all the larger editions of the Yi Ching, consists, as can be seen in the diagram behind me, of a square surrounded by a circle. I displayed this diagram behind me.

In the square the sixty-four permutations of the hexagrams are arranged in the order of what  may be called their natural succession,

that is to say, on substituting for broken lines zero (o), and for full lines the figure " 1," we can read the hexagrams as a series of numbers from o to 63,., written in the binary system.

There is another arrangement of the hexagrams. This one is ascribed to Wen Wang, who I mentioned before. The mathematical order is lost, but a new meaning is added: the idea that the one hexagram changes into its counterpart.

Beginning from the right on the bottom line the design exhibits in the even columns the inverse arrangement of the kwa of the odd columns, with this exception, that whenever an inversion would show the same figure, all the Yang lines are replaced by Yin lines, and vice versa.

It stays a mystery to me, why the Chinese philosophy stayed focused on these combinations of lines and their interpretation for centuries.