413: The Aftermath of Neo-liberalism - Introduction

In  my previous lectures I have demonstrated that the present idea of a free market is a utopia, based on a Randian misconception of the human condition and human nature.

Besides that, the beliefs of neo-liberalism are based on a complete misconception of the ideas of Adam Smith and at this moment, due to all this narrow mindedness and wishful thinking,

we face one of the biggest financial and economic crises in history. Resent history has been the clash of the systems: Communism versus Capitalism.

And while large crowds were cheering, the Berlin Wall fell on November 9, 1989. It became the symbol of the collapse of communism as a feasible social and economic system and the apparent victory of capitalism.

Now, about 25 years later, we must conclude that this was a Pyrrhus victory, that capitalism has not brought the solid and secure economy, which is beneficial to the common interest.

So, we have to face the question: "What next?" How should our world look like? Who owns what and how is it justified? How should the limited wealth of this earth be shared and distributed?

To give you a recent example…. The North Pole. Who in the world would be interested in that lump of ice except some scientists and adventurers?

But the situation has changed. To be honest, people smell  money there because of gas and oil. Suddenly maps are deployed, pencil and ruler at hand and states are confronted with the question: Who owns the North Pole and why?

So, What next? That is the question I want to investigate and analyze in this project. The first half will be an analysis of the questionable ethical characteristics and effects of the free market in our life.

The second half will deal with human nature, with the basic question, related to the idea "Greed is good". We have to answer the question what we really are.

Are we what Aristotle suggested, beings guided by virtues or like  Thomas Hobbes (….) thought: "Homo homini lupus", predators among predators, each one for himself?

In this context we love dichotomies and we have a number of them: are we basically egoistic or altruistic beings? Are we basically individualistic or social beings?

Are we independent individuals, fighting for our autonomy or do we long for belonging to a group? Are we basically ratio or emotion driven?

In 1996 the pharmacists supplied about 80 million standard daily doses of antidepressants. In a period of 15 years this has increased with 230% !

Today 259 million SDD of antidepressants  are supplied. And here I am talking only about figures,which apply to the Netherlands only!

"We are all sickened by the current economic system. While produce, consume and enjoy are the holy trinity of the neoliberal belief,

there comes just less valuable from our hands and we feel emptier, sadder and lonelier than ever.", to quote the Belgian professor of clinical psychotherapy. Paul Verhaeghe.

My desk is littered with newspaper clippings. All dealing with different aspects of the collapse of capitalism. Let me quote a banker, a VIP among Dutch bankers.

The headline of the article: "Ethics among bankers is hard to find." Subheading: "The banking industry has become an industry where you can do anything as long as there is no rule that forbids it."

According to George Möller (64), author of the book "Waardenloos (Without values)" (2012), it is about time that such condemnable attitude changes.

The first economists such as Adam Smith, were economists with morality. In their form of free capitalism was assumed that the people were friendly virtuous and that it was the silent hand of God that eventually guided our actions.

They closed transactions in the confidence that  both parties involved benefited from then. That increased prosperity.

In the second half of the 20th century, economics disguised itself in a cloud of mathematical models and assumed the attitude of being equal to natural science.

People like Milton Friedman and Paul Samuelson built models for monetary gain. Transactions are concluded because they made money for you . That someone else is harmed - or even being ripped off - is not seen as immoral as long as it is not prohibited.

And this has led to our present situation. In many political debates we are no longer treated as human beings, but simply as costs. It's about time that we rethink our position. 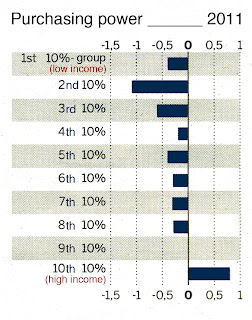