586: Existentialism & Free Will - an Introduction

Welcome to you all. It’s been a while, I know and it is good to see you again. A new project… Existentialism and Free Will.
.
Why this combination of themes? Free will has always been debated in philosophy, but only in logical arguments.
.
These days, however, there are people, who claim to have empirical evidence, neurological evidence, that free will is just an illusion created by the brain.
.
We never were shocked by the argument that because God knows EVERYTHING, so…also what I will say in the next lines,
.
it is impossible, that free will can exist, because while I believe I choose freely, God already knew what I would choose.
.
We will look into this debate later in the project of course. However, empirical evidence…. neurological evidence ?  That is a different story.
.
Funny thing is, that by saying this I am in fact already begging the question of this project: why should empirical evidence have so much more weight than logical conclusions from an argument?
.
Existentialism, in a nutshell, is completely based on the assumption, that we make choices. Because we are free to choose due to our free will, it makes us morally responsible.
.
Now, assume that this idea from neurobiological quarters is true, that free will is in fact an illusion, then logically all fundamental ideas of existentialism are based on an illusion,
.
which would mean that we could forget about existentialism as a view of man and his condition. Someone even might say, that existentialism thus in fact is like any other religion.
.
Ok, somebody might protest here and say: Hold on…do you mean that any religion is based on an illusion? Personally I would answer the question with “Yes”.
.
For I still do not understand how it is possible to  murder your fellowmen and justify such actions by referring to religious believes.
.
Only homo sapiens murders and kills, motivated by believes, not only religious ones, but equally political and ideological ones.
.
This brings us close to a quintessential element of this project: individualism. According to the dictionary it means
.
“Belief in the primary importance of the individual and in the virtues of self-reliance and personal independence”
.
or “a social theory advocating the liberty, rights, or independent action of the individual”.
.
More scientifically formulated along the lines of thought of Max Weber in his “Economy and Society” (1922) it amounts to the idea,
.
that social phenomena must be explained by showing how they result from individual actions, which in turn must be explained through reference to the intentional states that motivate the individual actors.
.
Thus we could come to the observation, that existentialism is based on free which which as such shapes the individual and thence society, that is, our culture.
.
Now look at the conversation in the cartoon of psychiatrist doctor Sigmund, which was published in my newspaper last week.
.
Patient: Doctor Sigmund, my end is near and that is about time, because I act arrogant and superior and expect, that everyone thinks like I do.
.
Doctor Sigmund: Tell me…. Do you happen to be Western Civilization?
.
Patient: Beware, you may use  that term only in a mocking  and dismissive way.
.
It is 2015 and a cartoonist feels, that his is the right moment to create this cartoon. Where does such an idea come from? Why does it emerge now?
.
I’ll offer you the following interpretation. Just like  Samuel Huntington predicted are we now in the midst a clash of civilizations, as he described in his article in Foreign Affairs in 1993.
.
In the introduction of his book (1996) “The Clash of Civilizations And the remaking of World Order” he writes:
.
“One grim Weltanschauung for this new era was well expressed by the Venetian nationalist demagogue in Michael Dibdin's novel, Dead Lagoon (1994):
.
’There can be no true friends without true enemies. Unless we hate what we are not, we cannot love what we are.
.
These are the old truths we are painfully rediscovering after a century and more of sentimental cant. Those who deny them deny their family, their heritage, their culture, their birthright, their very selves!
.
They will not lightly be forgiven.’ The unfortunate truth in these old truths cannot be ignored by statesmen and scholars.
.
For peoples seeking identity and reinventing ethnicity, enemies are essential, and the potentially most dangerous enmities occur across the fault lines between the world's major civilizations.”
. 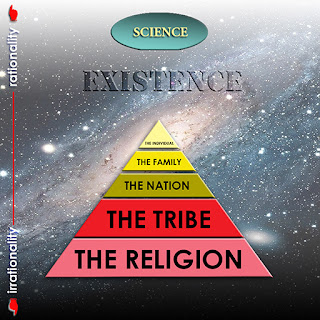 It is from this perspective, that I want to develop this project and from which I take a stand. In the diagram behind me I have tried to visualize the quintessence of my ideas.
.
You could interpret the diagram from the perspective of “seeking identity and reinventing ethnicity”.
.
Homo sapiens is a social animal with one exceptional and unique quality: his rationality, which enables him to explain his existence and identity ultimately by knowledge, by science.
.
This does not imply, that homo sapiens is a rational being. Sometimes you even tend to believe that the opposite is true.
.
The only claim I make is that eventually it was his ability to think in a rational manner, that shaped his existence through evolution into what it is now.
.
However, when we look at the world how it is now, we must conclude that homo sapiens defines himself, his identity, his values, his social bonds in ways, ranging from irrationally to rational.
.
“For peoples seeking identity and reinventing ethnicity, enemies are essential…” and your first enemy is the person who does not believe in the same god as you do.
.
When you drop religion, you still can stick to the bonds within your tribe and if tribes are no longer the binding factor, you still have your country, your nation-state.
.
If the  nation-state ceases to bind people, they still have their family.
.
When the family falls apart the homo sapiens realizes, that eventually he is only an individual, who has to define himself like Descartes did with his “Cogito, ergo sum”.
.
Eventually, what is left to homo sapiens is his rationality, which enables him to understand and interpret the reality he lives in.
.
That is what enabled him to develop physics or medical science, what made him visit the moon or communicate using his cellphone.
.
Against this background I’ll try to analyze, how man eventually defined his existentialist position and then I’ll try to understand this human condition in relation to claims that free will might be an illusion.
.
And we even may discover, that existentialism as we know it, is not at all the kind of interpretation of individualism in conjunction with rationality we seek.
.
Thank you for your attention…the floor is yours :-)
.