Welcome everyone. It is always a pleasure to see that I do not have to start a new project for empty chairs.

The present project is quite an interesting one, for it is about a philosopher, who for some reason is  still in the picture today.

To illustrate this…. at the end of the previous project I asked some friends, what could be a good subject for the next project.

And it was Beertje Beaumont, who suggested ….SPINOZA.

Spinoza? Why Spinoza? Yet it rang a bell, for I had a book of Antonio Damasio on my desk waiting to be read and its title contained the name “Spinoza”.

Spinoza, mentioned by two totally different sources. There had to be a reason. So I made Spinoza the primary subject of this new project.

I may be a philosopher by academic education in RL, I am not an expert in detail on Spinoza and his ideas. Yet, of course, I am quite familiar with his kind of philosophical ideas in general.

So my next step was to read Damasio’s book “Looking for Spinoza - Joy, Sorrow and the Feeling Brain” and to read all kinds of literature on Spinoza and his ideas.

And I can tell you,what I found was really amazing. A thinker of more than 350 years ago, whose philosophical point of view is still 100% topical today.

Moreover, to my astonishment, there even is Spinoza merchandise! Yes..! Let me show you a few items. Maybe there is something you’d like to purchase :-) 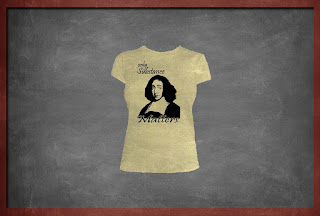 Who is this Spinoza? Why does Damasio say, that his neuroscientific thoughts relate to him. Why does Beertje mention his name? Why can you even buy a Spinoza cap?

I think, I found an explanation.

Spinoza was born in 1632 and died in 1677. And during his only 45 years of life he had become a huge danger for the philosophical and especially theological establishment.

His ideas became even so threatening, that there has been a attempt to murder him. The only philosopher I know, who was killed by an assassin was Moritz Schlick (1882 - 1936)

The 17th century was an interesting period. There really was blooming something new: SCIENCE. And with science here I mean knowledge, freed from and independent of theological dogmas.

Science was freeing itself from religion. The Catholic Church had tried to block this development, for instance, by stifling Galileo Galilei ( 1564 - 1642 ), but this new development  showed to be unstoppable.

For us this is just history, but put yourself in Spinoza’s place. Look at the timetable behind me. For Spinoza this event must have been hot news. He must have heard about it.

And there was his own situation. He, Spinoza, member of the Jewish community of Amsterdam was eventually banned from it in the most horrible way, due to his philosophical ideas.

Spinoza lived in a world, in which scientific and philosophical ideas constantly were threatened by the dominating religious powers. So you had to be careful in what you say.

The Netherlands of those days was a remarkably tolerant country, so the history books tell us. Tolerant in so far what you said could get the approval of the theologians.

Yet to understand what kind of revolutionary steps were taken in the evolution of the mind, just put it in a wider perspective.

In the period 1600 to 1700 the picture looked like this. China and Japan were dominated by the dogmatism of Confucianism and Buddhism.

India was in the grip of Buddhism and hinduism, while the arabic world had come to a standstill due to the dogmatism of the Islam.

Africa was still in the dark and supplier of slaves. In South-America complete cultures were destroyed by conquistadores.

In North-America colonists from Europe were busy confiscating land, that was actually the habitat of the many indian tribes.

Only on one stop on earth, that is, in Europe, the human mind succeeded in freeing itself from the chains of religious dogmatism and learnt to look at the world in a scientific way.

From then on answers to questions were no longer based on beliefs, but on observations, facts and empirical research.

Of course this a somewhat simplified picture of a much more complex situation, but imagine yourself amidst such a revolution of the mind.

Spinoza lived in such a world and the revolution was carried out by just a handful of great minds in Europe. You almost literally could count them on your 10 fingers. 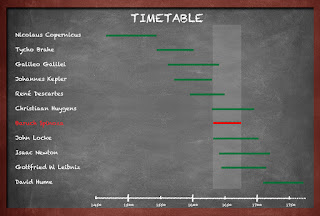 When you look at the timetable behind me, you can see that Spinoza must have known several of these great minds and indeed he had contact with them.

But why are people today still interested in Spinoza? And why were his ideas in his own lifetime enough to set whole packs of theologians to fire?

-QUOTE-  Although he was a naturalist - in the sense of holding that nothing exists outside of or beyond Nature - Spinoza was no simple atheist hiding impiety in conciliatory or ironic theistic terminology.

Rather, by reconceiving Nature as active and self-causing, and at the same time reconceiving God as nonpurposive and extended,

he was able to conceive of God as identical with, rather than as the transcendent creator of, Nature.-END QUOTE-

It is kind of Garrett , that he says that Spinoza was not a “simple” atheist, whatever that may be, but I take the liberty to claim, that Spinoza simply WAS a materialist and consequently an atheist.

Spinoza did the same as Descartes, that is, adding God to his metaphysics without any logical necessity. It was almost impossible in those days not to do so, if you wanted to live.

To openly be a materialist and consequently an atheist in our days is not as dangerous as in the days of Spinoza, but still it is hardly appreciated.

Just try to become, for instance, President of the United States and tell your voters, to begin with, that you are an atheist. Good luck!

In other words, it really is worth while to study the ideas of Spinoza, which to some extend are still as threatening to some people today as they were in his days.

So, I welcome you all to the new project and I hope, that we’ll have an interesting time ahead together.

Posted by herman Bergson at 9:43 PM