The latest news! It was in my newspaper this morning and on dozens of news sites. I found this on the  The Telegraph (UK) site:
“Thousands of years of human knowledge has been learned and surpassed by the world’s smartest computer in just 40 days,
a breakthrough hailed as one of the greatest advances ever in artificial intelligence.
Google DeepMind amazed the world last year when its AI programme AlphaGo beat world champion Lee Sedol at Go,
an ancient and complex game of strategy and intuition which many believed could never be cracked by a machine.
AlphaGo was so effective because it had been programmed with millions of moves of past masters, and could predict its own chances of winning, adjusting its game-plan accordingly.
But now the same team has created a machine that learns from scratch. AlphaGo Zero was taught how to play Go,
but given no additional instructions. Instead it learned the best moves over time, simply by playing millions of games against itself. “ -end quote-
For me, as a Go player myself, this is exciting news, but more exciting is that we have here a machine that learns from scratch.
The development of these self learning algorithms in Artificial Intelligence looks like a huge breakthrough.
Is this the beginning of the end? I mean this: in my newspaper of last Saturday they published an award winning essay. 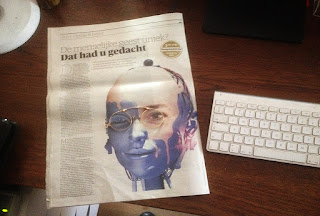 A translation of the headline could be: The human mind unique? Forget it….
Pretty disappointing message, if you take into account, that we are spending our time on discovering how to understand the unique Self we have.
The argumentation of the author of the essay, Gijsbert Werner, is like this:
The question is: which scientific developments forces us to redefine ourselves and our position in the universe?
After every redefinition we have to conclude that we have become less unique than we thought we were in the universe.
1. The invention of the telescope forced us to accept that our universe is heliocentric and that earth is just a tiny spot in an endless universe.
2. Geology as science forced us to accept, that the earth is not as the bible says five or six thousand years old.
The earth is more than 4 billion years old and only a few million years ago man appeared on that earth.
So, we are not the center of the universe nor are we the crown on creation. We are just a rather unobtrusive species on a hardly noteworthy planet.
We have a complex brain, because our thoughts and experiences have a useful evolutionary function.
From an evolutionary point of view our mind is not a goal as such, but our mind is nothing more than a useful set of tools to stay alive in our (social) environment.
Research already has demonstrated that self-awareness is not a unique feature of homo sapiens anymore.
Neuroscience  still may be in its infancy, but with every discovery of the actual patterns and mechanisms
that encode specific experiences and thoughts in the brain, it becomes clearer that our mind has a physical basis.
At a very substantial level our thoughts are formed by interacting molecules and neurons.
The more we can manipulate and intervene in these processes, the more undeniable it will be.
Fortunately, there remains a last line of defence for the defenders of the uniqueness of the human mind.
After all, even if we fully understand how thoughts are formed in our brain, notions like self-consciousness may eventually be specific tothe  human brain.
With a bit of luck, we may become more and more clear and transparent, but at least still unique in that respect.
With a computer, which accumulated real knowledge in 40 days which took Go players some 3000 years
and with a Self, which moved from the center of creation and universe to a result of physical processes on a hardly noteworthy planet,
I guess the moment is near, that we have to redefine ourselves again and our place in the universe.
Thank you again for your attention….. ^_^

Posted by herman Bergson at 1:56 PM