The more you study on the subject of Free Will, the more interesting it becomes and the more complex it becomes too.

I have added a few details to our diagram in relation to free will. As said, our positive freedom, our freedom to act is what makes us the individual we are. 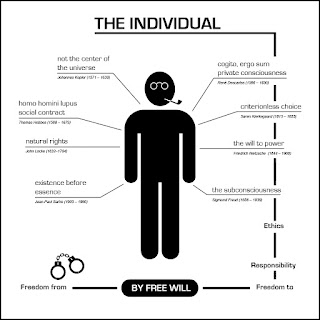 But freedom? I guess this is a good moment to quote Clint Eastwood in his role as Dirty Harry: “A man has to know his limitations.”

Yes, we all believe our life is guided by our free will, but yet we are well aware that there are all kinds of limitations. Food for philosophers….

So there is a constant battle going on between our sense of freedom and our awareness , that one way to an other we can not act differently than we do…

Let’s have a closer look at these “forces” which seem to limit our freedom.

A  first one is the roles of ‘chance and necessity’ in human life and the impotence of the individual’s will in the face of it.

A second problem are some aspects of christian thinking. The believe that god has absolute foreknowledge of everything, means that all our actions are already knows, thence determined.

But when science freed itself from religious dogmas and went its own secular way, we didn’t regain our freedom.

On the contrary, we had to face a third attack on our freedom: the general law of causality. If everything is ruled by laws of physics and we are physical beings or objects………. ?????

Awareness of a fourth attack on our freedom is that feeling that every day is the same to you,  the perception of the endless repetition

of the same patterns of action and behaviour in individual lives, the impotence of the will to change these patterns.

You sigh and conclude, that you are the product op your childhood and education and that you can not get rid of its effect on your behaviour.

Through history philosophers have faced the four problems and tried to find satisfactory answers for human freedom in a world of cause, chance and necessity.

We are flesh-and-blood beings. As such we are part of the material world and so are subject to its causality.

We are social beings and live in a world shaped by the culture to which we belong. We owe our very modes of thinking and assessment to it.

We share its form of life and activities with others who exist independently of us and who co-operate as well as oppose us.

We have a history, a past and roots in that past, attachments and loyalties.

And, last but not least, chance too has a part in the events that confront us in our life and often stand in our way.

We do not act in a vacuum and so we cannot be free in a vacuum.
.
Each one of us has to find his freedom, in the sense of autonomy, in a world of cause, chance and necessity.

However, when we look around in this world, we see, that our concept of human freedom,

which makes us the individual persons, we can be, is nor really shared by everyone.

And looking for a future of this world….is this a good thing or a bad thing?

Thank you for your attention…. the floor is yours…^_^