First I want to do is to congratulate Gemma with her appointment as Assistant Professor of The Philosophy Class. 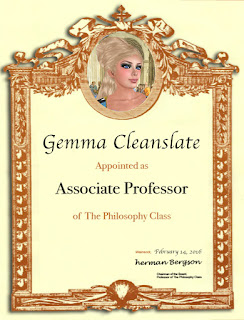 The Board of Directors of the Philosophy Class, of which I am the only member, voted unanimously for her appointment

to express its appreciation and gratitude for the pleasant cooperation through the many years and her never wavering loyalty to philosophical thinking.

Congratulations, Gemma, you really deserve it….. ^_^

And now back to work….. The idea of being in control of how we act, the “up-to-us-ness” of our actions, is an idea we all share.

It is a constant and fundamental feature of our thinking, and one that we can all recognize.

And the idea is irresistible. However sceptical we may become when doing philosophy,

once we fall back into ordinary life we do all continue to think of how we act as being up to us.

Thinking of ourselves as being in control of how we act is part of what enables us to see living as something so valuable.

In so far as we can direct and control how we ourselves act, our lives can be genuinely our own achievement or failure.

Our lives can be our own, not merely to be enjoyed or endured, but for ourselves to direct and make.

Or so we think. But are we really in charge of our actions? Is how we act truly up to us as things

such as the past, the nature of the universe, even many of our own beliefs and feelings, are not?

The problem of whether we are ever in control of how we act, and what this control involves, is what philosophers call the free will problem.

Most important is, of course, what Isaiah Berlin called the “positive” freedom, the freedom to… to be an individual, in our case.

It is fascinating to see , that the free will problem is as old as philosophy itself. In other words, like ethics, we apparently are not able to answer the fundamental questions in an unambiguous way.

This is understandable, because, as we already saw, free will is closely related to action and thence to the question “Was this a good, just or fair action?”

This could lead to the conclusion, that there would be no ethics at all, if there does not exist a free will. Everything would have a physical cause.

That is pretty extreme. It is counterintuitive. It is not the way we think about ourselves. So let’s summarize our position.

Regarding the  problem of free will, you could see the situation like this: You can not speak of a free will. Our will is our determination to act.

It is like Sartre’s idea of choice. The adjective “free” can not be applied to “choice”. You can not escape to chose.

So, when we are determined to…. or ready to choose to…., then we are free, that is, we are free to act, we have options.

To put it in a simple way: for centuries philosophers wander between on the one hand the idea that whatever we do is just an event in a determined causal chain of events,

while at the other extreme there is the idea whatever we do is totally undetermined. Indeterminism is important for the question of free will

because strict determinism implies just one possible future. Indeterminism means that the future is unpredictable.

Indeterminism allows alternative futures and the question becomes how the one actual present is realized from these potential alternatives.

In the previous lectures we studied the development of the concept of “the individual”.  One of the quintessential characteristics of the individual is freedom, call it free will.

In the coming lectures I’ll present you with the answers suggested by a number of philosophers and it will be up to you to take your stand.

Thank you for your attention…the floor is yours ..:-)

Posted by herman Bergson at 9:56 PM