599: Some evolution of the Individual

What I try to achieve with this project is to obtain a kind of clear picture of the meaning of the concept “the individual”.

We take it so for granted that we are respected as an individual, that we may claim individual rights, freedom and property.

On the other hand, as soon as we claim that this is a real positive achievement and compare this with other cultures, which don’t support individualism,

in no time we’ll hear the objection that this is Eurocentric or Western thinking and values. Is this kind of cultural relativism justified?

As a working hypothesis I take the view, that individualism as it has evolved in Europe is an evolutionary step in the development of the mind.

It is rather dangerous to add in line with modern ideas like “We are our brain”, that this also relates to an evolutionary step in the development of the brain. Yet through the ages our genes have mutated.

If you value individualism and the individual, you then implicitly would be claiming that the Western brain is more evolved than the brains of people in other cultures.

But because we hardly have any idea how the mind is related to or generated by the brain and the equation BRAIN == MIND is questionable,

why couldn’t there be two lines of evolution, one of the brain and one of the mind?

Just imagine a complex machine and two operators. They both operate the same machine, but operator A gets significantly better results than operator B.

Then you would conclude that operator A is better than operator B. You could analyse how A and B operate the machine and thus discover the cause of the discrepancy.

A simple example from real life. Assume that all homo sapiens in this stage of his evolution have the same central nervous system and brain.

But we can see, that using that brain in one way is better than in another way or to say it in other words: a person with education has more chances of survival than one without education.

Thence you could come to the conclusion, that education contributes to or even influences the evolution of the mind.

One of the strong forces in how we use our brain is the WE versus THE OTHERS thinking.

Archeological findings proof, that this way of using our brain has a long history. Recently 10.000 years  old remains were discovered in Kenya.

You need little imagination to picture what must have happened 10.000 years ago…. it was US against THEM. 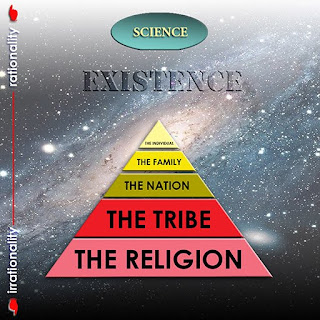 The diagram, which I presented you is completely based on this atavistic feeling. Just think of religious or tribal feelings……they intrinsically define THE OTHERS.

Up to the present day we see how all acts of terrorism are justified by claiming that THE OTHERS have to be killed.

And then there is Descartes, not defining his personal identity by contrasting it to THE OTHERS, but by simple reference to the consciousness of his own mind.

That is what this project is about: the hypothesis that consciousness of individuality is an evolutionary stage in evolution of the mind.

So let’s continue our research on this subject….

Thank you again for your attention….the floor is yours…

Posted by herman Bergson at 1:12 PM