Philosophy aims at clarification and understanding. What marks out an investigation as philosophical is its concern
.
to provide ultimate explanations and understanding, or failing this, to find some other final or halting description, such as ‘mystery’ or ‘brute fact’ or simply “for the moment unanswerable”.
.
Or you might suggest a speculative answer. For some reason it sometimes seems to me, that we have trouble to live with unanswered questions.
.
In my previous lecture I already pointed at the option, that not every sentence, which looks like a question, is a meaningful question.
.
An other often observed line of thinking is, that when there can’t be found a scientific explanation, there still can be another explanation: a supernatural one.
.
This is what J.J.C. Smart in his “Atheism & Theism” (2003) called  a “God of the gaps”. As he wrote:
.
To argue for theism on the basis of gaps in scientific explanation is a risky endeavor, since the gaps may be filled in.
.
Thus Newton held that God would have to readjust the motions of the planets from time to time as the perturbations due to their mutual accelerations built up.
.
Later La Place proved the stability of the solar system.4 E.W. Barnes was a fine mathematician who became a theologically modernist and skeptical bishop.
.
Nevertheless, more than sixty years ago he wrote ‘The mystery of life is unsolved, probably insoluble’.
.
If he had known of all the developments in biochemistry and molecular biology that have occurred in more recent times
.
he would no doubt have thought the mystery to have at least been greatly diminished.( pg.152)
.
When you look at history, there yet may be some hope on ultimate explanations and understanding.
.
In the early days of mankind, I guess, for almost everything was a supernatural explanation.
.
Step by step our rational and scientific mind came up with other kinds of explanations.
.
Consequently the realm of the supernatural is getting smaller and smaller and the realm of scientific explanation grows and grows.
.
In the Australia, US and Europe this has lead to an extensive debate on theism and atheism. In other areas it seems to lead to violence and plain murder to “defend” the particular theism.
.
As I have said already several times, it is totally uninteresting for each of us to declare how important we think it is to be a theist or an atheist.
.
That is not the focus of this project. What I am focused on here is to study the reasonings and arguments which are used in the debate.
.
Or to use J.J. C. Smart’s words regarding the goal of his debate with J.J. Haldane in “Atheism & Theism”:
.
“Sympathetic understanding of one another’s position is what I here aim for.”
.
To which I would add, that maybe  history may show, what the ultimate explanations are in this debate
.
On some website on Atheism I found a nice explanation of how to get a sympathetic understanding of one another’s position.
.
Take your time to read the flowchart closely.
. 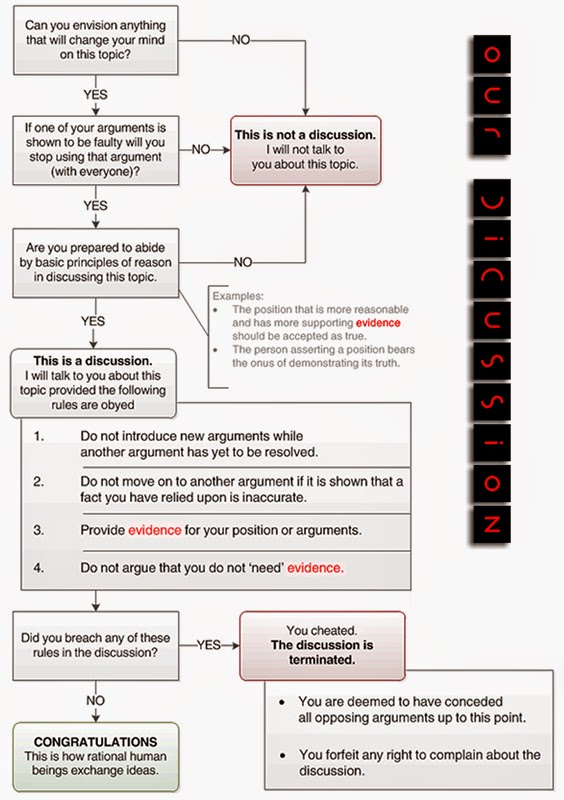 A quintessential feature of such a discussion is EVIDENCE. In the atheism vs. theism debate is the legitimacy of evidence an important issue.
.
Let me state at least one condition for evidence to be legit: it has to be observable and verifiable,
.
not only for the person who offers something as evidence, but also for independent others.
.
Thank you…. the floor is yours….. ^_^
.

Posted by herman Bergson at 9:08 PM