If there is one legacy of the 20th century that has a great impact on our daily life in the 21st century, then it is environmental awareness and our understanding of ecological systems.
The ecological movement originated in the mid-19th century. The original word, oecology, was first used by the German Ernst Haeckel (1834 -1919), zoologist, marine biologist.
and purposely referred to economics, which is also derived from the Greek "oikos", "house / home."
There has always been a close link between ecologie and economy, and many German economic thinkers from the early 20th century were enthusiastic about the concept of ecologie.
Before the 1960s ecologie was primarily a mindset in which the countryside - nature, peasant life - was contrasted with the city life.
Today the meaning of Ecology refers to a branch of biology that studies the interactions among organisms (like us :-) and their biophysical environment, which includes both biotic and abiotic components.
In 1964 US president Johnson  pointed in a speech at the deterioration of the environment and the need to take action.
The extensive use of DDT in agriculture and its destructive effects had alerted biologists, like  e.g. Rachel Carson
with her book "Silent Spring" (1962), a serious indictment of the devastating effect of pesticide use.
In 1969, 39 countries met in Rome to talk about pollution. In their report, "The Limits of Growth," published in 1972, they concluded that it was five to twelve.
The Limits to Growth (LTG) is a  report on the computer simulation of exponential economic and population growth with a finite supply of resources.
The study used the World3 computer model to simulate the consequence of interactions between the earth and human systems.
The model was based on five variables: "population, food production, industrialization, pollution, and consumption of nonrenewable natural resources".
Two of the scenarios saw "overshoot and collapse" of the global system by the mid- to latter-part of the 21st century, while a third scenario resulted in a "stabilized world". 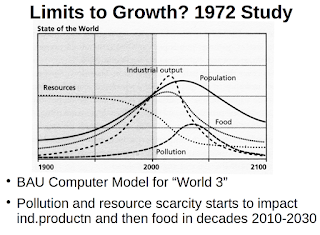 Of course, the conclusions in the report were attacked and even ridiculed by all kinds of critics. However, contemporary research begins to confirm the conclusions of the report.
Christian Parenti, an American investigative journalist, academic, and author, writing in 2012,
sees parallels between the reception of LTG and the contemporary climate debate,
"That said, 'The Limits to Growth' was a scientifically rigorous and credible warning that was actively rejected by the intellectual watchdogs of powerful economic interests.
A similar story is playing out now around climate science and climate change."
Fooling around with my granddaughter of almost four years old I sometimes wonder about HER world.
But I stay optimistic....we can fix it....thank you...

Posted by herman Bergson at 9:38 PM