803: Is the Counter Culture really forgotten...?

What did survive of this legacy in the 21st century. Love didn't win.....capitalism, greed, shareholders and multinationals did, it seems....
That was how I concluded my previous lecture. Before we admit to the aforementioned vision of our world, we have to see if there is really nothing left of the Counter Culture
I already mentioned Theodore Roszak's book "The Making of a Counter Culture" (1970). He drew a sharp picture of what was going on in the 1960s.
Roszak starts with a chapter in which he criticizes reductionist science and the way it produces a 'one-dimensional' society that is extremely unsatisfactory for many people.
Reductionist science is in fact  how we understand science today. Everything is reduced to an almost materialistic view of reality.
Every statement has to be logical, verifiable, falsifiable, based on empirically testable facts, measurable and so on.
This leads us to the famous book "One-Dimensional Man" (1964) by Herbert Marcuse.

Marcuse strongly criticizes consumerism and modern "industrial society", which he claims is a form of social control.
Marcuse argues that while the system we live in may claim to be democratic, it is actually totalitarian.
A form of technological rationality has imposed itself on every aspect of culture and public life, and has become hegemonic.
Our identification with this hegemonic ideology of modern industrial society, this ideology does not
represent a form of "false-conscious", but rather has succeeded in becoming reality.
The concept of "one-dimensional man" asserts that there are other dimensions of human existence in addition to the present one and that these have been eliminated.
A new culture must take its place in which the non-rational capacities of the personality,
the capacities that are ignited by the beauty of idealism and the experience of human connectedness, determine what is good, true and beautiful.
In essence class consciousness as a productive principle is giving way to consciousness' consciousness.
This means that self-realization is not achieved by material success, higher income or better production,
but by entering the true realms of consciousness and its (neglected) many layers.
This was expressed by "Make Love not War", Flower Power, search for Eastern philosophies, gurus, Zen, interest in Buddhism, sexual freedom, LSD, etc.
Are we still working on our self-realization. Is finding our true inner self as the true goal in life?
At least you still can buy all kinds of Buddha statues in many shops here. I have one on my desk. See the picture behind me. 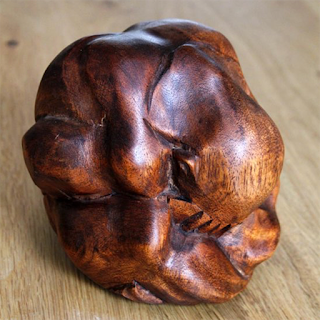 It is Orang malu, the Indonesian name for the shy man. He is also called the Yogi man or "weeping buddha".
The Buddha who cries for the suffering of the world. According to legend, you have to place the orang malu with its face to the door.
The visitors must pat him over his head on arrival and he takes over any bad thoughts, so that all visitors enter your house with good intentions.
Thank you for your attention....The floor is yours.....

Posted by herman Bergson at 8:48 PM